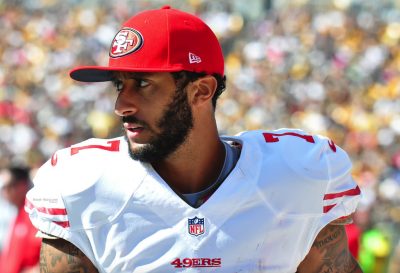 When San Francisco 49ers quarterback Colin Kaepernick refused to stand for the “Star Spangled Banner” during a preseason game, he didn’t “bring politics into football.” Football – like most things in this country – has always been political. We’ve just spent an inordinate share of our lives trying to ignore it.

Following Kaepernick’s initial sit-down protest of the national anthem two weeks ago, he explained to NFL Media that he was “not going to stand up to show pride in a flag for a country that oppresses black people and people of color.” He went on by saying, “this is bigger than football and it would be selfish on my part to look the other way. There are bodies in the street and people getting paid leave and getting away with murder.”

“This is not something that I am going to run by anybody. I am not looking for approval. I have to stand up for people that are oppressed. … If they take football away, my endorsements from me, I know that I stood up for what is right.”

Less than a week later, Kaepernick took a knee during the national anthem and was joined by a teammate, Eric Reid. Following that demonstration, he said, “Once again, I’m not anti-American,” Kaepernick said. “I love America. I love people. That’s why I’m doing this. I want to help make America better. I think having these conversations helps everybody have a better understanding of where everybody is coming from.”