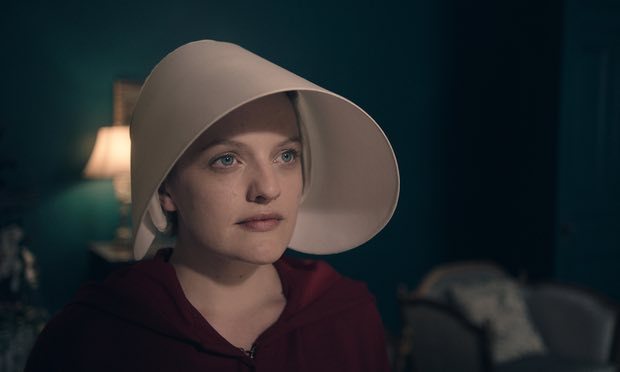 “I love you. Mommy loves you, Charlotte.”

I watched a character named “Ofwarren” speak those words to a rosey-cheeked baby before jumping from a bridge. She was attempting to end her own life. Ofwarren survived the plunge into the cold waters below. Yet, the image of a mother willing to die, and kill her own child, made the scene especially powerful.

This mom, a red-caped handmaid, was white, though. A fact that the Hulu hit series The Handmaid’s Taleseems to exploit. When one considers the actual enslavement and treatment of Black women in the United States and throughout the transatlantic Black Diaspora, the show just doesn’t sit well.

When you think of the show on these terms, it makes the underlying premises quite problematic.

The show is based on the 1985 novel of the same name. Written by Canadian author Margaret Atwood, it tells the story of Offred, a handmaid in a dystopian near-future New England city called the Republic of Gilead. There, the mostly white women concubines are subjected to slave-like conditions. In this reality, wealthier “commanders” and many of their wives are sterile. Thus, commanders systematically raped and exploited handmaids, using them as hosts to bear children before immediately taking them away.

While the original story was set in the late 22nd century, the television show seems to be just around the corner. This is a fact Atwood recently reflected on, acknowledging the parallels between her counter-revolutionary, patriarchal rendition of the United States.