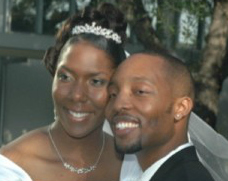 I never expected to get married at 22-years-old. I envisioned myself as a briefcase wielding, pseudo-Oprah taking over the world. Then, my husband happened in my freshman year of college. And that was that. While we have a pretty fairytale style romance, we neglected to do what most black couples do on their wedding days: jump the broom. I feel pretty sour about it.

We were college sweethearts. We knew we wanted to get married and have children within months of dating. After being best friends for almost a year, it was like the stars had aligned. And, the wedding was the best day of our lives. It was a beautiful sunny May day in Orange County. We had everything and everyone we needed. Everything except the broom.

We are both black folks from California. He is a Socal native and I hail from the Bay Area (Oakland to be exact). We were both raised by single mothers. And, we both understand our black history. So, everyone expected we would be ‘jumping the broom’ at our wedding. But, neither of us was interested.

Several times during our two year engagement I asked him, “You sure you don’t want to jump the broom?” To which he’d answer, “For what?” “I don’t know…tradition,” I’d say reluctantly. Then we’d both do a Kanye shrug and go back to playing video games.

What was most interesting was everyone else’s reaction to it. “So, who’s going to carry the broom?” my wedding planner asked me a few months before our wedding day. “No one. We aren’t jumping the broom,” I said ready to rattle off all of my reasons for that choice. She looked at me. Her eyes were gasping. You know that look when, if eyes could talk, they’d be saying “Gurl! Are you outta your mind!?!” It was actually pretty funny. “Well, I am sure you have a good reason for that. So, do you honey,” she chuckled after her eyes caught their breath. But, I knew her judgey eyes linked to judgey thoughts.